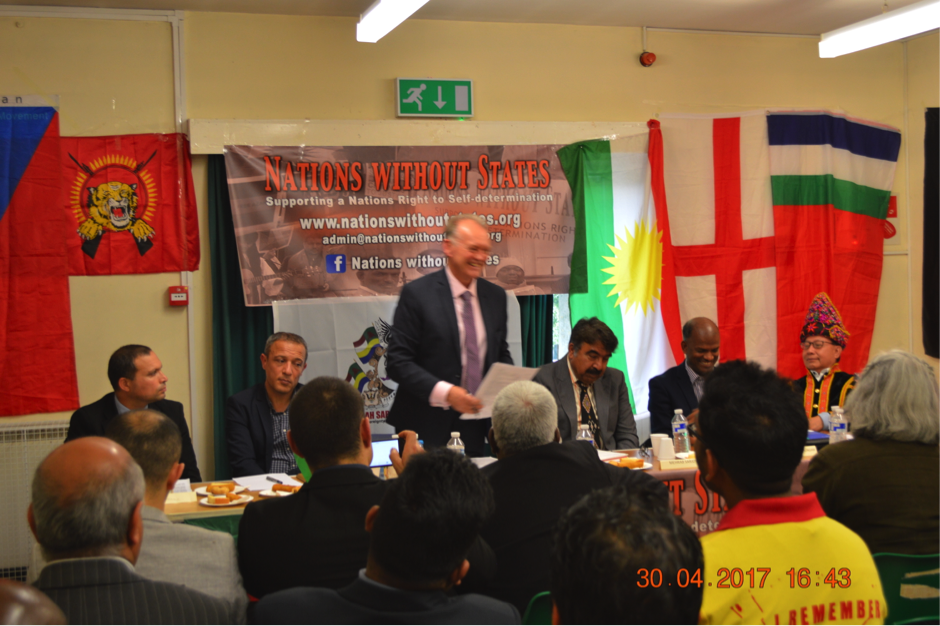 – Resolution made at the Self-determination: Today and Tomorrow Conference –

The Nation Without States (NWS), an independent organisation sponsored by the National Liberal Party (NLP) hoisted a conference on 30th April 2017 to bring all the stateless people together to fight for their right to self-determination in London.

At the welcome note, Mr Graham Williamson, Councillor and Chairman of the NWS and NLP, who chaired the event, stated that “Despite the right to self-determination being part of the first article of the United Nations Charter, it is not willingly adhered too. Despite there being perhaps 200 nations looking to be empowered or simply recognised, only a handful have become free since the great periods of decolonisation in the 1940/50/60’s e.g. East Timor, Kosovo, South Sudan.

He further stated, “Whilst this usually involves a minority peoples struggling against a majoritarian one, it crucially involves a world community (or at least its elites) backing the latter against the former. This is partly due to self-interest i.e. fear of their own oppressed nations but also what the global elites expect. Whether it be the UN, OAU or the EU, ‘separatist’ movements are ultimately unwelcome”.

The conference explores the opportunities for self-determinist struggles at present (today) and the future (tomorrow). Many activists from various oppressed ethnicities attended this event and gave speeches of the problems they face in their own countries. 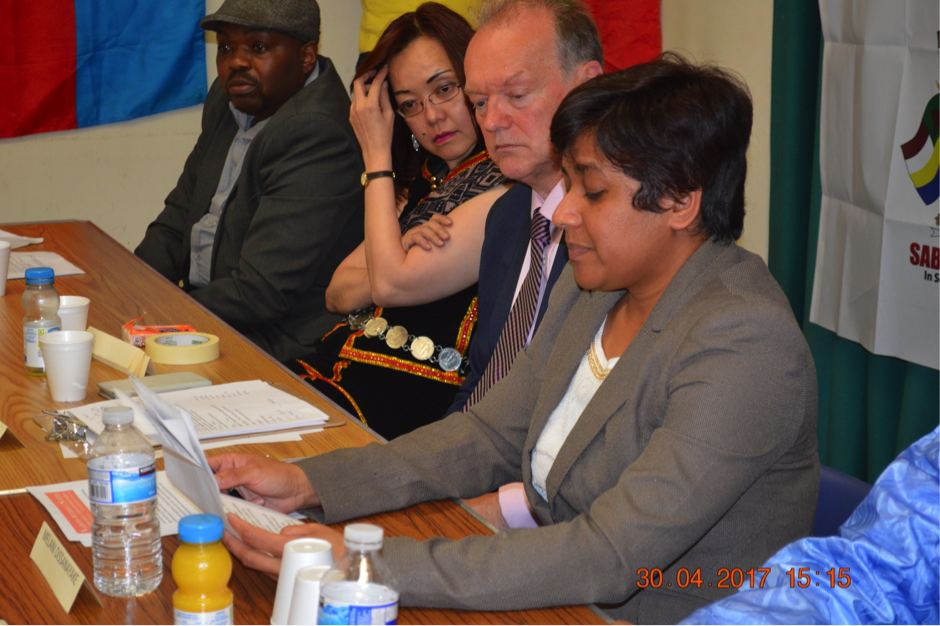 Mrs Melani Dissanayake, a Human Rights Lawyer from Sri Lanka who is currently working as a volunteer researcher with the International Centre for Prevention and Prosecution of Genocide (ICPPG) and Tamil Information Centre (TIC) represented the Tamils from Sri Lanka in this event and invited them to act immediately before it is too late. The full version of her speech as follows;

First of all, I must thank you all for inviting me to this event and giving me this golden opportunity to speak to you today.

Coming from the Singhalese Majority Community in Sri Lanka, I am proud to be here today and support you in your struggle right to Self-Determination and justice for the oppressed. I must specially thank the National Liberal Party (NLP) who sponsors the Nation Without States (NWS) to host this very important event.

As a Human Rights Lawyer, I have represented and assisted a number of Tamils detained under the Prevention of Terrorism Act – known as PTA, the most draconian act, specially designed t suppresses the freedom struggle of Tamils in Sri Lanka.

The denial of the right of self-determination to the Tamil people in Sri Lanka who have been subject to an agenda of genocide since independence in February 1948 is deeply disappointing.

History of Sri Lanka confirms that the Tamils existed for more than 3000 years in Sri Lanka. Therefore, their Right to self-rule is legitimate.

“The Tamils continued their rule until 1833 when the British invaded Sri Lanka and destroyed the Kingdoms”.

The British united the Island was for their administrative ease of the Tamils. This ended the sovereignty of Tamils in the North and East of Sri Lanka.

When the British left Sri Lanka in February 1948, they acted in the most irresponsible way and handed the power to the Singhalese Majority. This is called the Independence Day of Sri Lanka. But the bitter truth is – this is the inauguration day of Tamil Genocide in Sri Lanka. Since this day, the Sri Lankan successive Governments embarked on a programme of discrimination, marginalisation, Sinhalisisation and Buddhisisation on aiming at assimilation, disintegration and ultimate disappearance of Tamils as a race and nation in Sri Lanka.

The discriminatory legislations introduced by the Sri Lankan Government, triggered the Tamils to realise their need for self-determination.

The Sinhala only Act of 1956 and the Standardization Act of 1972 further relegated the Tamil language with the Tamil students being denied of admissions to universities on merit, leaving them angry and frustrated.

However, the now- violence struggle of Tamils was suppressed by the violent riots. In 1956, in 1958, in 1971, in 1977 and in 1983 mass massacres directed against the Tamils in all parts of the Island by the Security forces with the blessing and support from the State. These were aimed to make them feel as unwanted inferior citizens or aliens in their own country.

The crushing of non-violent agitations with brutal force forced the Tamils to restore to violence as a self-defense. Finally, the Tamils were forced to take arms, as their last resort, and fight for their existence.

The most draconian Prevention of Terrorism Act of 1979 – known as the PTA – is specifically targeting the rebelling Tamil youth in Sri Lanka. The sixth amendment of the Sri Lankan Constitution criminalises anyone who speaks about independence or a separate state. These were aimed to deny the Right of Self-Determination to the Tamils in Sri Lanka and to silence their voice for freedom.

The Tamils are now left to ensure their existence with no other alternative but to resort to the Right of self-determination granted in the UN Covenant. The Universal Declaration of Human Rights 1948 has its preamble even endorsed the right to rebellion against tyranny and repression so that human rights should be protected by the ‘Rule of Law’.

If the Tamils in Sri Lanka, fail to call for their right of self-determination, their very existence will be in question.

We must call for a referendum to determine the political status of Tamil people in Sri Lanka. Tamils cannot afford to suffer the systematic Genocide any longer. Hoping for justice from the UN and International community will not be sufficient. Tamils must continue to fight to ensure its survival and preservation of its culture, language, history and religion in Sri Lanka.

In conclusion, I hereby promise you that, we, the Singhalese brothers and sisters who follow lord Buddha genuinely, will stand by you in your struggle for Self-Determination.

Thank you all again for giving me this opportunity. Every human being in this world must enjoy the right of Self-Determination”.

Mr Kapilan Rasamani, who himself suffered torture for supporting the freedom struggle of the Tamils in Sri Lanka, played a key role in making this event successful. He is one of the prominent young Tamil activists, who is currently volunteering as the Head of Admin of the International Centre for Prevention and Prosecution of Genocide (ICPPG) and a Coordinator of the Transnational Government of Tamil Eelam (TGTE). When he speaks to the media, he stated; “This conference and campaign is initiated with an aim to raise awareness and to show solidarity with other ethnic groups who are stateless in carrying their struggle forward. It was also an initiative takes to unite the Stateless and oppressed ethnic groups in coming together to express one common view. Also, it uses to show our support to our people in our homeland, Tamil Eelam in Ilankai

(Sri Lanka- symbol of the oppression).

Moreover, we stand, side-by-side, shoulder-to-shoulder with oppressed people and our brothers and sisters back home. We stand in solidarity with the people fighting against the oppression back home. We take the path which was shown by our National Leader and make the dreams of our Martyers come true by winning the freedom of Tamil Eelam.”

At the end of the conference, the representatives of the states signed a document of cooperation and the event successfully came to an end. 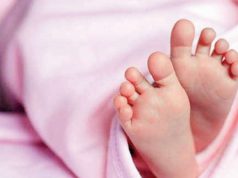 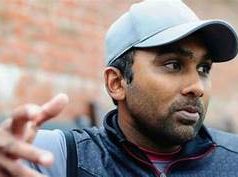