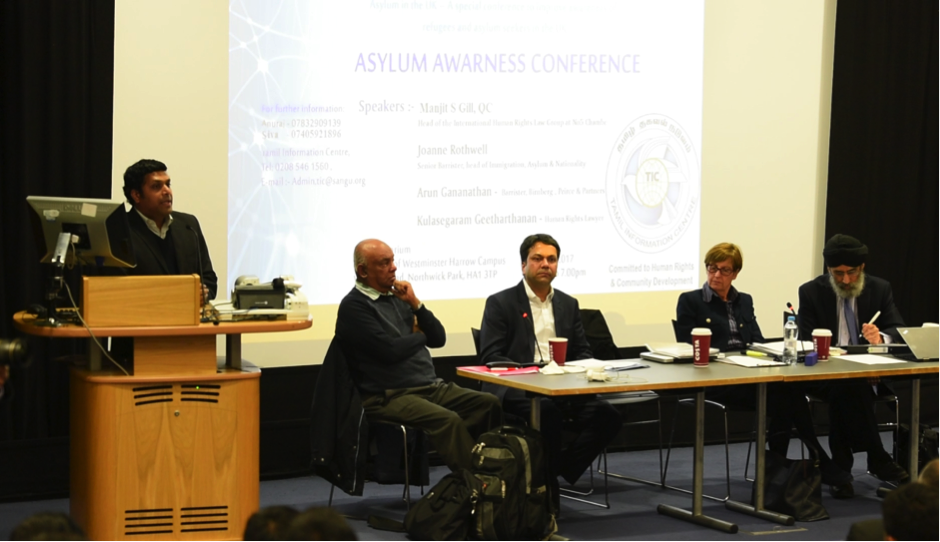 Many organisations continue to talk about the genocide, war crimes and human rights violations committed against the Tamil people in 2009 in their struggle to achieve justice. Legal experts argue that the focus needs to shift towards current issues faced by Tamil people in the political campaigns towards achieving justice.

Political asylum claims serve as important evidence for on-going issues in Sri Lanka. Human Rights Defender Kulasegaram Geetharthanan (Geeth) informed the audience that the fact that political asylum cases continue to be accepted by the British judiciary proves that there are still on-going human rights violations in Sri Lanka.

He expressed this at the Asylum Awareness Conference on Saturday 18th of March 2017, where current issues faced by refugees and asylum seekers and possible solutions to these problems were discussed.

The British government is currently making many changes in the laws that affect the asylum – seeking process. The conference, which was held at Westminster University, addressed the new problems that asylum seekers might face with these changes and what solutions there might be for them. The role of political and human rights organisations in regards to these issues was also discussed.

Senior Barrister Manjit S Gill QC (Head of the International Human Rights Law Group at No 5 Chambers), Senior Barrister Joanne Rothwell (Head of the Immigration, Asylum & Nationality at No 5 Chambers), leading Barrister Arun Gananathan and Human Rights Defender Kulasegaram Geetharthanan took part in the expert panel and provided their legal expertise on these issues at the conference, which was organised by the Tamil Information Centre (TIC).

The event started 4.30 pm and the opening speech was held by the Director of the Tamil Information Centre Mr Varadakumar. He spoke about the origins of the Tamil Information Centre and about their projects before thanking Mr Kulasegaram Geetharthanan who proposed the organisation of this conference. He also emphasised that Tamil people back home continue to fight for their basic rights, because their human rights and political activities continue to be supressed.

Human Rights Defender, Kulasegaram Geetharthanan contends that organisations, which campaign for the rights of Tamil People, need to take the statistical evidence from the asylum claims seriously. He also outlined the basic information that one needs to know when claiming asylum and explained the legal procedure and mentioned the institutions related to this.

He further explained that political asylum was defined under the 1951 Refugee Convention. You can be granted political asylum if you are persecuted in your own country due to your religion, political opinions, membership of a particular social group or because of your sexual orientation. In the UK 36% of asylum claims are granted at initial decision by the Home Office. 54% of the claims get refused at initial decision and 10% are withdrawn. Of the claims that are allowed appeals 31% are accepted. In total 49% of asylum claims are granted and 51% are refused or withdrawn.

He also emphasised that when the asylum is granted people still need to be careful for the next 5 years and refrain from any criminal activity. He also argued that the actions of people who have been granted asylum could affect the chances for future asylum seekers. At the end of his speech he encouraged refugees to be ambitious in their goals and not to think of themselves as inferior. He showed a photo of Malala Yousafzai meeting the queen to illustrate the infinite possibilities to succeed in life that exists for refugees and asylum seekers.

Joanne Rothwell informed the audience that the current COI report refers to those who are viewed as being separatist and working for a separate Tamil Elam will be at risk if they return to Sri Lanka. She also informed the audience that the interviewer could question whether they were Tamils from Sri Lanka or if they were from India. The success of an asylum claim will solely rest on its credibility.

From a nursing and counselling background with emphasis on mental and women’s health, Joanne’s dissertation in her LLB (Hons) focused on Judicial Review within the area of Mental Health.

She became a barrister in 1993 she has successfully represented several hundreds of Tamil Asylum cases including number of high profile LTTE members cases. She Routinely acts for highly vulnerable clients, including minors and individuals with mental health issues. Her broad caseload regularly sees her acting in complex immigration, asylum and nationality matters. She and she has expertise in all areas of Immigration and Nationality law and European law at all levels including the Asylum and Immigration Tribunal, Administrative Court, House of Lords and European Court of Justice. She has a varied practice within her field and is instructed by Local Authorities, NGO’s, Law Centres and Private Law firms.

Joanne Rothwell has a special interest in the crossover of immigration law with family law and prepares opinions for Local Authorities and Law firms for use in the Family Division. She undertakes seminars at solicitors firms and is an Examiner at Central Law Training (CLT). Joanne practices Immigration and Nationality Law and European law relating to free movement of people, business immigration and deportation issues.

In the year 2016, she is chosen as one of the top 500 barristers by the Legal 500. She is described as “ she has a wealth of experience handling nationality, asylum and EU free movement matters. She has a particular interest in cases featuring mental health issues. “She is phenomenally clever and wonderfully capable.” “Every time there is an element of complexity of law or sensitive issues, she is the one I go to without fail.” She is elected as one of the best barristers by the Chambers UK 2017, which describes her as ‘Very friendly and cordial while staying highly professional.’

Joanne Rothwell is Head of the Immigration, Asylum and Nationality Group at No5 Chambers. She is also a member of the Court of Protection, Education Law Group, International Human Rights Law Group and Public Law Group.

Furthermore, Manjit S Gill QC informed the audience that even if one is granted asylum it is not a permanent solution. He also said there are many ways to easily lose your right to asylum. It is important to note that they can either choose to accept your claim for asylum or they can exclude the claim.

The current government in the UK have limited the amount asylum cases related to human rights abuses that they accept. This is due to changes in the procedures, which means that each case will be reconsidered after a period of time to see if there still are grounds to remain in the UK.

Manjit Singh Gill QC is an Honorary Professor at University of Birmingham. He is appointed as a Queens Counsel in 2000. He is currently the Law at No 5 Chambers.

He is quite simply one of the foremost immigration practitioners and has been involved in many of the leading cases in this field in the last 15 years. His work has often involved international law issues. He is particularly well known for having done of many of the landmark cases in immigration law, often involving detailed analysis of public and private international law. He has advised extensively on all aspects of immigration including business, family, and EU related immigration issues. He has advised corporations on the large scale movement of labour across different jurisdictions. He has argued some of the most highly publicized and ground-breaking constitutional, public law, international law and human rights cases of the last 10 years with regular appearances in the House of Lords and Supreme Court. He has also conducted ECJ and Eur Ct of Human Rights cases.

He has argued some of the most highly publicized and ground-breaking constitutional, public law, international law and human rights cases with regular appearances each year in the House of Lords and Supreme Court. He has also conducted Court of Justice and Eur Ct of Human Rights cases. His work in the international field has involved: The law relating to failed states (e.g. Somalia, with repercussions in commercial law), Effects of deprivations of nationality and statelessness (East African Asians and different categories of British nationals), The laws of war, laws of internal armed combat, humanitarian law, (e.g. Krotov’s case), Use of rape as a weapon of war and the protection of women (Hoxha and B), Indefinite detention of terrorists without trial (the Belmarsh case), Torture and ill-treatment treatment by states of suspected terrorists (A v SSHD), Extradition (various Supreme Court and High Court cases concerned with children, the mentally ill, and construction of the Extradition Act 2003; he has appeared on national BBC news and on South African TV to provide expert legal comment on the Shrien Dewani extradition to South Africa), Advising on death penalty cases in other jurisdictions, Proscription of suspected terrorist organisations, He has represented proscribed organisations, including as a Special Advocate, and has regularly appeared before the Special Immigration Appeals Commission in national security cases including cases challenging the removal under memoranda of understanding of terrorist suspects to regimes where they face torture. He is particularly committed to working for disadvantaged groups. His clients have also included major international corporations, foreign royalty, governmental, non-governmental bodies and campaigning groups.

The last speaker Arun Gananathan said the world is experiencing nationalisation rather than globalisation. The nationalists are taking the power in many countries. As a result of this the UK is now going to leave the European Union.

He also said that many people claim the issues in Sri Lanka are no longer there due the change of government. However, human rights reports produced in Sri Lanka show that Tamil people are being arrested and being accused of terrorism, and also tortured to this day.

Arun Gananathan is the most famous and leading successful lawyer in the UK. He is also a qualified as a barrister and he has trained many other lawyers in the UK. He represented many high profile reported cases, which became the case law in the field of asylum and immigration. He worked hard for the success of the current Sri Lanka Country Guidance case whch is known as GJ and Others (post-civil war: returnees) Sri Lanka CG [2013] UKUT 00319 (IAC).

This provides the guieline for the Home Office and the Judges when they make a decision on a Sri Lankan Asylum claim. This hearing took place at the Upper Tribunal for more than 2 weeks and the Court heard evidence from various high profile experts including UN Special Rapporteur, Human Rights Watch and TAG on the human rights violations in Sri Lanka. As a result, the Court produced this very detailed guidance on more than 100 pages in 2013.

The event successfully ended with question time and vote of thanks by Mr Kulasegaram Geetharthanan. 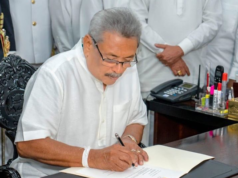